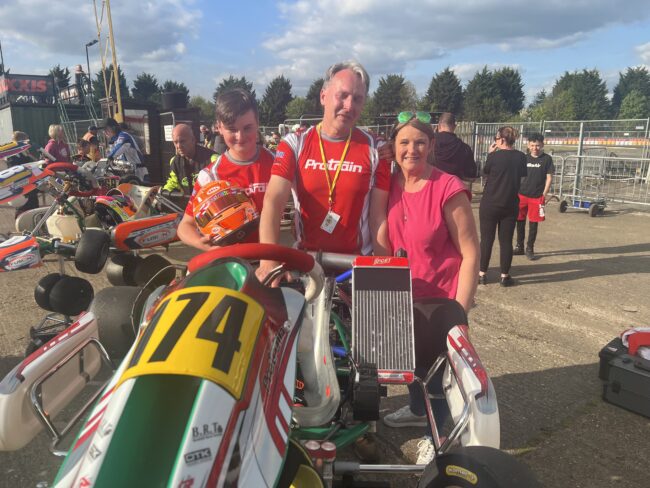 We all thought April was great for Luke Taylor at Kimbolton with a new track lap record and third place, but at the Anglian Championships Luke drove superbly to take a well deserved victory.

Like the April victorious Jack Collins, Luke only started racing at the end of April 2021 following the final lockdown.  He progressed well in Juniors but really started to shine with a movement into Senior X30 in February.  Taking to the increased engine power and higher grip tyres, Luke has not looked back.

April was a great month for him with personal bests at Shenington and Whilton Mill, the highlight of the month was the new track lap record of 39.87s at Kimbolton and third place and a podium in the final.

This month, in the Anglian Championship race meeting timed qualifying was used to set the grid positions.  Luke drove from the front to secure pole position for his first heat.  This he won and followed up with third in the second heat.

A hard fought Pre Final put Luke on 3rd for the final.  After a tremendous first lap Luke took the lead and left the rest to dice for second.  Pullong out 2.14s by the finish Luke took his first of many victories.

We look forward to a great future for him.

No comments to show.
Scroll to top
We use cookies on our website to give you the most relevant experience by remembering your preferences and repeat visits. By clicking “Accept All”, you consent to the use of ALL the cookies. However, you may visit "Cookie Settings" to provide a controlled consent.
Cookie SettingsAccept All
Manage consent

This website uses cookies to improve your experience while you navigate through the website. Out of these, the cookies that are categorized as necessary are stored on your browser as they are essential for the working of basic functionalities of the website. We also use third-party cookies that help us analyze and understand how you use this website. These cookies will be stored in your browser only with your consent. You also have the option to opt-out of these cookies. But opting out of some of these cookies may affect your browsing experience.
Necessary Always Enabled
Necessary cookies are absolutely essential for the website to function properly. These cookies ensure basic functionalities and security features of the website, anonymously.
Functional
Functional cookies help to perform certain functionalities like sharing the content of the website on social media platforms, collect feedbacks, and other third-party features.
Performance
Performance cookies are used to understand and analyze the key performance indexes of the website which helps in delivering a better user experience for the visitors.
Analytics
Analytical cookies are used to understand how visitors interact with the website. These cookies help provide information on metrics the number of visitors, bounce rate, traffic source, etc.
Advertisement
Advertisement cookies are used to provide visitors with relevant ads and marketing campaigns. These cookies track visitors across websites and collect information to provide customized ads.
Others
Other uncategorized cookies are those that are being analyzed and have not been classified into a category as yet.
SAVE & ACCEPT